Strona główna Episkopat Message of the Chairman of the Committee for Dialogue with Judaism of... 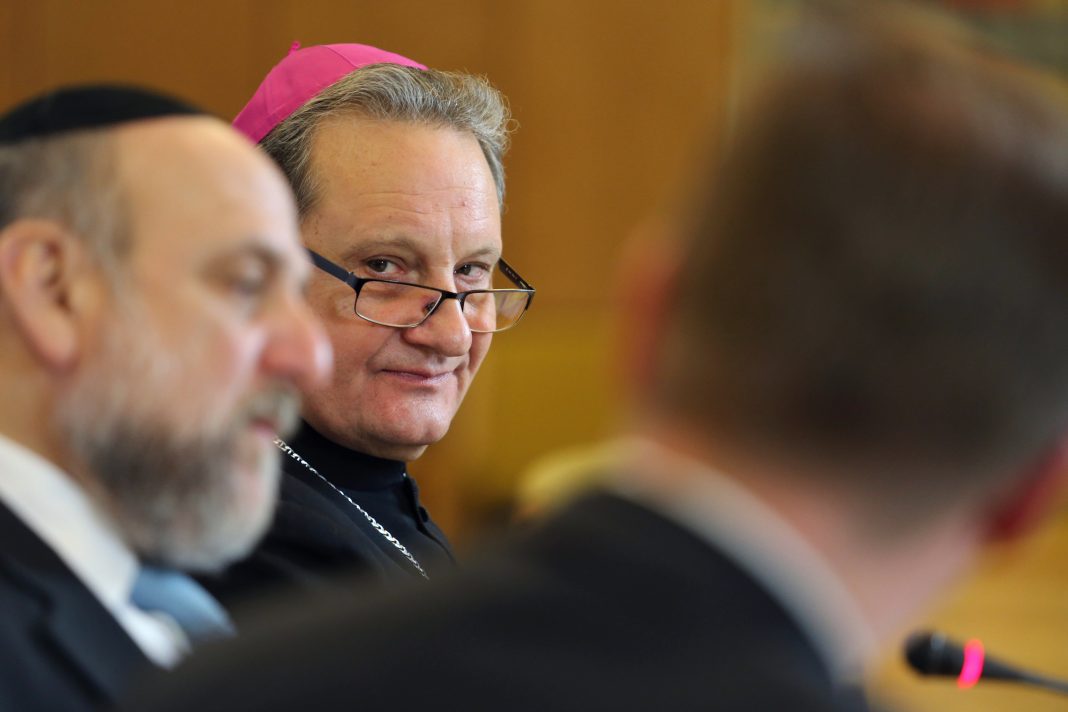 May the small 25th jubilee of the celebration of the Day of Judaism in Poland not become a reason for us to boast. Rather, let us treat this anniversary as an occasion for a two-fold reflection. First of all, let us once again make ourselves and others aware of the essence of the Day of Judaism in the Polish Catholic Church, by asking this question: Why was it established? Secondly, let us reflect on this first point in the context of the tremendous civilizational changes that have affected the world, Europe, Poland, and, hence, Christians over the last quarter of a century.

To put it briefly: the cultural processes, both those which emerged during that time and those which have been radically strengthened, confirm—in our opinion—the profound legitimacy of the decision to put the Day of Judaism on the calendar of the Polish Church. Now, I am not referring to the celebration itself but to the fact (ensuing from the common religious mentality in the Church or religiosity in general) that we constantly need to be reminded of important questions, to take them up anew and develop them; now, for Christianity, one of these questions is its origin from the Jewish religion. If we lose contact with it, we cut off our roots and so deprive ourselves of the sap necessary for life, according to the words of St. Paul: Remember that you do not support the root, but the root supports you (Rom 11:18).

The loss of the Judaic dimension of Christianity always gives rise to the development of some form of idolatry among Christians, to the reinforcement of pagan beliefs in them, and, consequently, to breaking the essential bond with Jesus Christ, who, as Head of the Church, wishes to remain as closely connected as possible to His Body, which is the Christians’ assembly, the convocation (ecclesia). The lack of awareness that we are like Israel, like the Jews, that like them we must find, in the words of the Holy Scriptures, our own selves, our own life, and salvation that comes from the One God, leads us towards the affirmation of other gods, of idols (such as money, prestige, self-fulfillment, work, and making idols of the family—the clan!—and even of religiosity), while they are, contrary to our conviction, not life-giving and in the end, always bring disappointment and ultimately a sense of meaninglessness. Discovering the Jewish roots of Christianity and remaining in them allows the Church and the followers of Jesus Christ to avoid reefs, traps, and blind alleys—and if they get entangled in them, to call God to rescue them. He does not refuse help, because He loves the sinner and does not want his loss and death. At the words of the prophet sent by God, the Jews, following King David, admit: We have sinned against God and people; we have gone down the wrong road; forgive us, we want to return to you! In his journey with God, as well as in moments when he turns away from Him, the Christian becomes convinced that He alone is the source of life: “Lord, to whom shall we go? You have the words of eternal life” (Jn 6:68).

Jewish and Christian religious experiences are not—as many believe—detached from reality; they do not mean “floating in the clouds” or “walking around with one’s head in the clouds;” on the contrary, they grow out of concrete events. Both Jews and Christians are people who, in their search for the meaning of life, find the history of salvation in their existence; moreover, they begin to perceive the road with God as the only one that is worthwhile, because without Him everything becomes tasteless, and, so, the Lord’s followers, however religious they may be, lose hope. If God is the Lord of history, then in difficult moments, following Job, we can say: We have received the good from the hand of God. Why can we not accept the bad? (Job 2:10). Jesus Christ fully accepts and takes upon himself suffering and death because he knows that the Father will bring life forth from this terrible situation. Jewish and Christian experience says the same thing: God loves life, He is its source and goal, and in His eyes, every human being has inalienable and permanent worth and dignity.

Civilizational changes have strongly undermined this conviction, so much so they have permanently expelled God not only from human life but even from thinking. Separation from the loving Father means that man himself no longer knows who he is, why he lives, or at what he is aiming. His perspective becomes exclusively horizontal, and he himself is in the center, with a false conviction about his own power and omnipotence. People who think and live this way are inevitably heading for some kind of annihilation, because in the fundamental questions of existence: life and death, suffering and happiness, they remain helpless.

During the past 25 years of the Day of Judaism in Poland, we have come to realize that the real Jews constitute the roots indispensable of Christians, and not only those who lived 2,000 years ago, but also those who today, like those Jews, live by faith in the One God. Their witness is a powerful help to us Christians, for it proves that God is faithful to his Covenant, that, loving His people and each of His creatures, He wishes to bring everyone into close intimacy with Himself. The presence of believing Jews in our time, still—despite centuries of persecution and the catastrophe of the Shoah during the Second World War—trusting in their God, is extremely encouraging and necessary for Christians. We have been able to experience this presence with gratitude in the course of the Days of Judaism celebrated in different Polish cities. The then developing dialogue is built on the testimony of life and hope of the Jews amid today’s world, which is trying to function as if God did not exist.

We are aware of the limited interest in the Day of Judaism in Polish parishes, but we should not worry about it. Indifference and even reluctance to respect these annual celebrations established by the Polish Bishops’ Conference in 1997 stems simply—as we would like to believe—from a lack of understanding of their aim. Now, that aim is to pray together to the same God, to create an opportunity for deepening the awareness of the existence of ties between Christianity and Judaism, and—through reflection on the connections between the two religions—to consider one’s own religion (that of the Catholics). I am reminded of the words repeated many times in the First Testament about the remnant of Israel which the Lord will keep for Himself, and about the fragility inherent necessary in the chosen people in order to prevail, so that they do not rely on themselves but on the powerful God, who is greater than any weakness. He needs only a small number of followers to accomplish His loving plan. It is very easy for many to be defeated by the hands of a few, for it makes no difference to Heaven whether He saves with the help of many or a few… true strength comes from Heaven (1 Macc 3:18.19b).

The 25-year-long history of the Day of Judaism in the Catholic Church in Poland primarily exists thanks to the people who create it. Through their commitment and actions, undertaken for the benefit of the Catholic-Judaic dialogue, this day has become a multidimensional, institutional, prayerful, and fraternal event. It is impossible to mention the names of all those who have contributed to the permanent inclusion of the Day of Judaism in the Catholic liturgical calendar. However, among them, some people have made a special contribution to this work and at the same time to the development of Catholic-Jewish relations in Poland for over 30 years. They undoubtedly include the retired Primate of Poland, Archbishop Henryk Muszyński, a pioneer and doyen of dialogue with the Jews, the first chairman of the Subcommittee and then of the Commission for Dialogue with Judaism of the Polish Bishops’ Conference (1986-1994), and a great friend of the Jewish people. His recollection of a meeting with the Chief Rabbi of Poland, Pinchas Menachem Joskowicz, on 19 April 1993 at the Nożyk Synagogue in Warsaw is eloquent: “It was with him that I was able to exchange the first embrace of a Catholic bishop with a rabbi in our postwar history, and later the rabbi of Warsaw Michael Schudrich and I prayed together in the synagogue” (Abp. H. Muszyński, Początek wspólnej drogi. Dialog katolicko-żydowski w latach 1986-1994 [The Beginning of a Common Road. Catholic-Jewish Dialogue in 1986-1994], Gniezno-Pelplin 2015, p. 14). Gestures of this kind then developed into personal bonds based on trust and mutual respect, but at the same time, they created a solid foundation for the Catholic-Jewish dialogue that was emerging on the institutional level.

The initiator of the first celebrations of the Day of Judaism in Poland, in 1998, and the organizer of the next ten was the next chairman of the Commission (transformed into a Committee in 1996) for this dialogue, Archbishop Stanislaw Gądecki, currently the president of the Polish Bishops’ Conference. Continuing and multiplying Archbishop Muszyński’s legacy, he strengthened this work through common prayer, many conferences and publications, and the development of extensive contacts with the Jewish world. Since 2007, the organization of nationwide celebrations of the Day of Judaism has been led by the Auxiliary Bishop of Lublin Mieczysław Cisło together with the Committee. Thanks to his commitment, these celebrations were complemented by important events related to the commemoration of the forgotten graves of Polish Jews. In this way, the Day of Judaism became an occasion to take care of abandoned Jewish cemeteries.

The above-mentioned representatives of the Polish Bishops’ Conference have, together with a group of outstanding collaborators who compose the Subcommittee/Commission/Committee for Dialogue with Judaism, played a key role in shaping from the very outset the Catholic-Jewish dialogue in Poland and at the same time in making the Day of Judaism a reality in the Catholic Church. Their work deserves the greatest recognition and the expression of our deepest gratitude. Now, because these undertakings have required great efforts on both sides of the dialogue, I address these words also to the representatives of Jewish circles, firstly to all of Poland’s chief rabbis, and at the forefront Michael Schudrich, who over the years has proved himself to be a man open to dialogue and friendly in mutual contacts. I thank the rabbis and representatives of Jewish communities who, over the years, have accepted invitations to participate in public theological discussions and to comment on biblical texts. I thank the Ambassadors of Israel in Poland and representatives of Jewish culture who understand that the joint celebration of the Day of Judaism in the Catholic Church is one of the roads that lead to peaceful and friendly relations between people and, at the same time, an opportunity to overcome stereotypes, prejudice, and indifference.

On my own behalf and on behalf of the Committee for Dialogue with Judaism of the Polish Bishops’ Conference, I cordially invite everyone to participate in the nationwide celebration of the XXV Day of Judaism in Poznan on January 17th, 2022. Their theme is the phrase taken from the Book of Isaiah: “My thoughts are not your thoughts” (Isa 55:8). 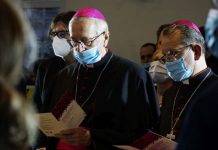 Archbishop Gądecki during the celebration of the 25th Day of Judaism: I thank God that this initiative is still alive 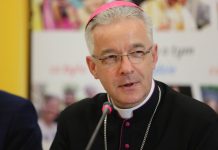