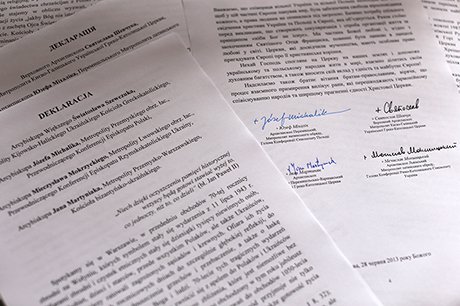 of the Major Archbishop Sviatoslav Shevchuk,
the Kiev-Halicz Metropolitan of the Ukrainian Greek-Catholic Church,

Archbishop Metropolitan of Przemyśl of the Latins Józef Michalik,
the President of Polish Bishops Conference,

Archbishop Metropolitan of Lviv of the Latins Mieczysław Mokrzycki,
the President of Roman-Catholic Ukrainian Bishops Conference

”May everybody, through a cleansing of the historical memory, be prepared to rank the things that unite as more important than those which divide” (blessed John Paul II)

We meet in Warsaw before the remembrance of the seventieth anniversary of the crimes of Wolyn, whose symbol has become the events of 11th July 1943. Tens of thousands of innocent people became victims of crime and ethnic cleansing; among them women, children and the elderly, mostly Poles, but also Ukrainians and those who rescued their endangered neighbours and relatives. The sacrifice of their life calls us, in these anniversary days, to a particularly deep reflection, to zealous prayer for the remission of these sins, for forgiveness and for the grace of the ability to stand in truth before God and man. The seventieth anniversary of these tragic events is also another opportunity to turn to both Poles and Ukrainians with an appeal for the undertaking of further steps on the way to coming closer as brothers, an  impossible task without sincere reconciliation. We are encouraged to do this by the jubilee of the 1025 years since the Baptism of Russia and the first year of the preparation for the celebration of the 1050th anniversary of the Baptism of Poland.  It is true that a baptized person and nation receives not only the remission of sins and the hope of salvation, but also the readiness to live out the Gospel of Jesus Christ with its precept to forgive wrongdoings.

We are aware that only truth can set us free (cf. Jn 8:32); that truth which does not embellish or leave anything out, which does not stay silent about anything, but which leads to forgiveness and remission of wrongdoings. As children of the one Father in heaven we direct a prayer to His mercy for  forgiveness in the spirit of Our Lord’s Prayer: “Forgive us our trespasses as we forgive those who trespass against us.” Let us take this opportunity to remember the wonderful times in our nations’ coexistence, about the joys and successes of cooperation, but also the wrongs done especially during the 2nd World War and in its aftermath. We know that the Christian assessment of the Wolyn crime requires us to condemn it unambiguously and to sincerely apologize for it, because we believe that neither violence nor ethnic cleansing can ever be a method of solving conflicts between neighbouring peoples or nations and they cannot be justified on political, economic or religious grounds.

We want today to honour the ones who were innocently murdered, but also to ask forgiveness of  God for the crimes committed and once more appeal to all, Ukrainians and Poles, living both in the Ukraine and in Poland, or anywhere else in the world, to bravely open their hearts and minds to mutual forgiveness and reconciliation.

We remind the words of Card. Lubomir Huzar from 2001, that “some sons and daughters of the Ukrainian Greek-Catholic Church did wrong – alas, consciously and willingly – to their neighbours both from their own nation and from other nations.” As the head of the Greek-Catholic Church I want to repeat these words today and apologize to Brother Poles for the crimes committed in 1943.

In the name of truth we believe that the attitude of those Poles who did wrong to Ukrainians and replied to violence with violence requires a sincere apology and a request for forgiveness.

As the President of Polish Bishops Conference I address a request for forgiveness to our Brothers Ukrainians.

Ukrainians and Poles both carry in their mind the painful wounds and memories of the Wolyn tragedy up to this day. They are particularly visible in the society of contemporary Ukraine, whose spiritual good is of utmost importance also for the Roman-Catholic Church in Ukraine. It is therefore, with the deepest concern, as the head of the Roman Catholic Bishops Conference of Ukraine that I join in the appeal for reconciliation. I hope that despite the tragic past good neighbourly and Christian relationships between Poles and Ukrainians are possible, wherever they meet, cooperate and think about the future.

We find extreme nationalism and chauvinism worthy of condemnation. This is because it was, alongside atheistic and totalitarian communism and nazism, the ideology which during the 20th century was responsible for millions of victims.

What to some then appeared as justified in God’s eyes, turned out to be the unscrupulous trampling on His commandments. In the presence of God, in the light of His clear command “Thou shall not kill!” we express a bitter awareness of the wrongs, since nothing can justify mutual enmity, ultimately leading to the shedding of a brother’s blood.

An objective understanding of the facts and a revelation of  the size of the tragedies and dramas of the past today becomes an urgent issue for historians and specialists, since it is only the learning of the historical truth that can calm down the emotions which have grown around this matter. Therefore we appeal to Polish and Ukrainian academics to do further research based on sources and to cooperate in explaining the circumstances of these shocking crimes, together with the creation of a list of the names of everybody who suffered. We also see a need to commemorate the victims in the places of their death and greatest suffering in an appropriate way.

We want to remind everyone that Polish and Ukrainian Catholic bishops had already begun talks about the need for reconciliation of both Churches in October of 1987, during a meeting in Rome preceding the millennium of the Kiev Rus Baptism. A year later a historic liturgy on Jasna Góra took place, with the presence of Card. Józef Glemp and the head of the Greek-Catholic Church, Card. Myroslaw Lubachivski. The millennium celebration of the Ukrainian Greek-Catholic Church on Jasna Góra, in the spiritual capital of Poland, was an important step heralding this Church coming out of its underground existence in the Soviet Union, where it was persecuted and forbidden.

The words spoken by blessed John Paul II in Lviv in 2001 had prophetic meaning: “May everybody, through a cleansing of their historical memory, be prepared to rank the things that unite  [us] as more important than those which divide [us]” in order to build together a future based on mutual respect, on brotherly community, cooperation and authentic solidarity.”

In June 2005 in Warsaw and Lviv a common letter of the Ukrainian Greek-Catholic Church Synod and the Polish Bishops Conference was published. It was then that both parties pronounced these words: “We forgive and ask for forgiveness!”, which had earlier been the foundation of Polish-German reconciliation, with the hope they would now bear fruit in the Polish-Ukrainian relationships. Thousands of believers confirmed the will of such conduct by saying “Amen.”

Today we pay tribute and honour the memory of those Ukrainians and Poles who, risking their life, rescued their neighbours from extermination or in some other way defended them in those dramatic times. We pray together for the eternal rest of all innocent victims who lost their life in 1943 in Wolyn. We also pray for God’s mercy for those who succumbed to the ideology of violence and hatred and also that the war, which came to an end in our lands a long time ago, will not  live on in the hearts of the people. So, having in mind the current and future generations, we repeat in the name of our Churches that hatred and violence are always a degradation of man and nation, while forgiveness, brotherhood, sympathy, help and love become a lasting and dignified foundation of the culture of human co-existence.

Thinking about the future, we are aware that without mutual reconciliation our Church could not be credible in fulfilling her evangelical mission and our nations will not have a prospect of cooperation and progress on the religious, as well as political grounds. We also believe that the cooperation of a free Poland with a free Ukraine is indispensable for this part of Europe to enjoy peace, for people to enjoy religious freedom and so that human rights will not be endangered. We also see a need for a common witness of Christians from both Poland and Ukraine in the uniting of Europe. We stand together in the face of challenges caused by secularization and the attempt to organize life “as if there was no God.” We are a part of God’s history of love and – in agreement with the encouragement of Pope Francis – we should be a linking element of this love in the world. Churches which experienced martyrdom have a particular right to remind Europe about its Christian roots.

May God look upon the Church living in our lands and help both the Polish and Ukrainian nations so that they, living in peace, may share their spiritual riches and contribute to the unity and future of Europe!

We also send brotherly greeting to our Orthodox Brothers, believing that the process of mutual reconciliation will heal the wounds which are an obstacle not only to the harmonious coexistence of nations but also to the sincere striving for the unity of Christ’s Church.