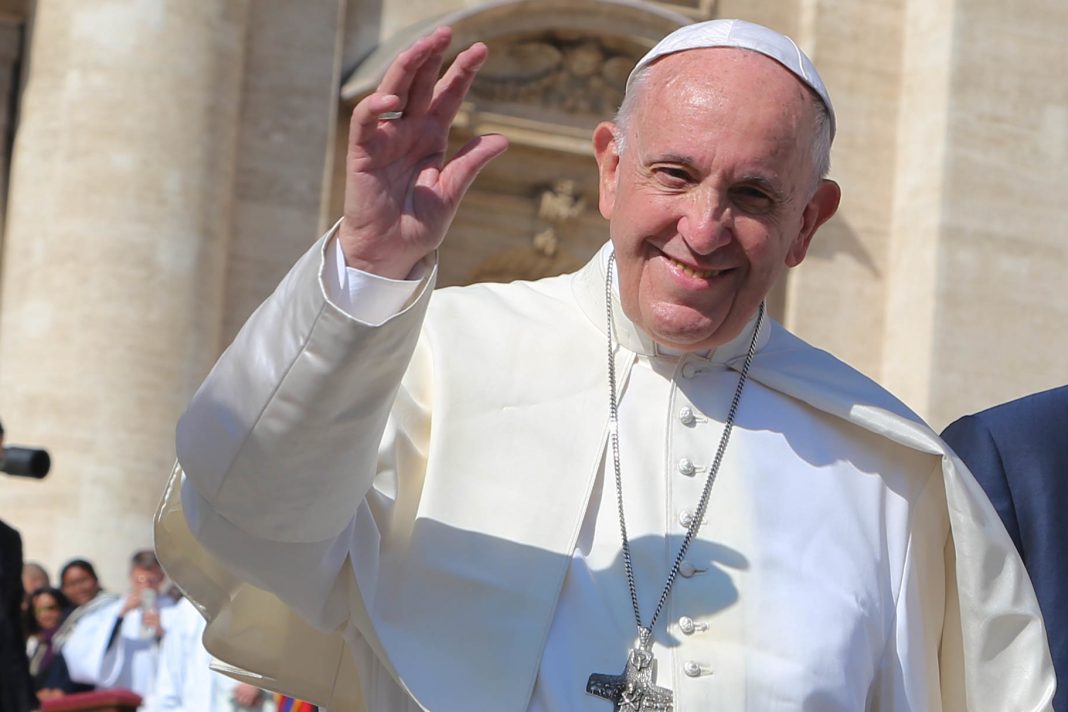 “It is my hope that the celebration of the World Day of the Poor, now in its fifth year, will grow in our local Churches and inspire a movement of evangelization that meets the poor personally wherever they may be. We cannot wait for the poor to knock on our door; we need urgently to reach them in their homes, in hospitals and nursing homes, on the streets and in the dark corners,” writes the Holy Father Francis in his message for the World Day of the Poor, announced today (June 14, 2021). It will be celebrated in the universal Church on 14 November 2021.

“Those who do not notice the poor betray Jesus’ teaching and cannot be His disciples,” emphasized the Pope.

We are publishing the full text of the message:

The first was indignation on the part of some of those present, including the disciples, who, considering the value of the ointment – about 300 denarii, equivalent to the annual salary of a labourer – thought it should have been sold and the proceeds given to the poor. In Saint John’s Gospel, Judas takes this position: “Why was this ointment not sold for three hundred denarii and given to the poor?” Saint John goes on to note that Judas “said this not because he cared about the poor, but because he was a thief, and as he had the money box, he used to take what was put in it” (12:5-6). It was no accident that this harsh criticism came from the mouth of the traitor: it shows those who do not respect the poor betray Jesus’ teaching and cannot be his disciples. Origen has strong words in this regard: “Judas appeared to be concerned about the poor…  If in our own day some hold the purse of the Church and, like Judas, speak out for the poor, but then take out what they put in, let them share in the lot of Judas” (Commentary on the Gospel of Matthew, 11, 9).

The second interpretation was that of Jesus, and it makes us appreciate the profound meaning of the woman’s act. He says, “Let her alone. Why do you trouble her? She has done a beautiful thing to me” (Mk 14:6). Jesus knows that his death is approaching, and he sees in her act an anticipation of the anointing of his lifeless body prior to its placement in the tomb. This was beyond anything the others present could imagine. Jesus was reminding them that he is the first of the poor, the poorest of the poor, because he represents all of them. It was also for the sake of the poor, the lonely, the marginalized and the victims of discrimination, that the Son of God accepted the woman’s gesture.  With a woman’s sensitivity, she alone understood what the Lord was thinking.  That nameless woman, meant perhaps to represent all those women who down the centuries would be silenced and suffer violence, thus became the first of those women who were significantly present at the supreme moments of Christ’s life: his crucifixion, death, burial and resurrection. Women, so often discriminated against and excluded from positions of responsibility, are seen in the Gospels to play a leading role in the history of revelation. Jesus’ then goes on to associate that woman with the great mission of evangelization: “Amen, I say to you, wherever the Gospel is proclaimed to the whole world, what she has done will be told in memory of her” (Mk 14:9).

The face of God revealed by Jesus is that of a Father concerned for and close to the poor. In everything, Jesus teaches that poverty is not the result of fate, but a concrete sign pointing to his presence among us. We do not find him when and where we want, but see him in the lives of the poor, in their sufferings and needs, in the often inhuman conditions in which they are forced to live. As I never tire of repeating, the poor are true evangelizers, for they were the first to be evangelized and called to share in the Lord’s joy and his kingdom (cf. Mt 5:3).

The poor, always and everywhere, evangelize us, because they enable us to discover in new ways the true face of the Father. “They have much to teach us. Besides participating in the sensus fidei, they know the suffering Christ through their own sufferings. It is necessary that we all let ourselves be evangelized by them. The new evangelization is an invitation to recognize the salvific power of their lives and to place them at the centre of the Church’s journey. We are called to discover Christ in them, to lend them our voice in their causes, but also to be their friends, to listen to them, to understand them and to welcome the mysterious wisdom that God wants to communicate to us through them. Our commitment does not consist exclusively of activities or programmes of promotion and assistance; what the Holy Spirit mobilizes is not an unruly activism, but above all an attentiveness that considers the other in a certain sense as one with ourselves. This loving attentiveness is the beginning of a true concern for their person which inspires me effectively to seek their good” (Evangelii Gaudium, 198-199).

Many are the examples of saints who made mutual sharing with the poor their life project. I think, among others, of Father Damien de Veuster, the saintly apostle to the lepers. With great generosity, he answered the call to go to the island of Molokai, which had become a ghetto accessible only to lepers, to live and die with them. He rolled up his sleeves and did everything he could to improve the lives of those who were poor, ill and outcast. He became both doctor and nurse, heedless of the risks involved, and brought the light of love to that “colony of death”, as the island was then called. He himself contracted leprosy, which became the sign of his total sharing in the lot of the brothers and sisters for whom he had given his life. His testimony is most timely in our own days, marked by the coronavirus pandemic. The grace of God is surely at work in the hearts of all those who, without fanfare, spend themselves for the poorest, sharing with them in concrete ways.

Here too, Jesus’ teaching goes against the grain, for it promises what can only be seen and experienced with complete certainty by the eyes of faith. “Everyone who has left houses or brothers or sisters or father or mother or children or lands for my name’s sake will receive a hundredfold, and inherit eternal life” (Mt 19:29). Unless we choose to become poor in passing riches, worldly power and vanity, we will never be able to give our lives in love; we will live a fragmented existence, full of good intentions but ineffective for transforming the world. We need, therefore, to open ourselves decisively to the grace of Christ, which can make us witnesses of his boundless charity and restore credibility to our presence in the world.

Last year we experienced yet another scourge that multiplied the numbers of the poor: the pandemic, which continues to affect millions of people and, even when it does not bring suffering and death, is nonetheless a portent of poverty. The poor have increased disproportionately and, tragically, they will continue to do so in the coming months. Some countries are suffering extremely severe consequences from the pandemic, so that the most vulnerable of their people lack basic necessities. The long lines in front of soup kitchens are a tangible sign of this deterioration. There is a clear need to find the most suitable means of combating the virus at the global level without promoting partisan interests.  It is especially urgent to offer concrete responses to those who are unemployed, whose numbers include many fathers, mothers, and young people.  Social solidarity and the generosity which many, thanks be to God, have shown are, together with far-sighted projects of human promotion, making a most important contribution at this juncture.

In this context, we do well to recall the words of Saint John Chrysostom: “Those who are generous should not ask for an account of the poor’s conduct, but only improve their condition of poverty and satisfy their need. The poor have only one plea: their poverty and the condition of need in which they find themselves. Do not ask anything else of them; but even if they are the most wicked persons in the world, if they lack the necessary nourishment, let us free them from hunger. … The merciful are like a harbour for those in need: the harbour welcomes and frees from danger all those who are shipwrecked; whether they are evildoers, good persons, or whatever they may be, the harbour shelters them within its inlet. You, too, therefore, when you see on land a man or a woman who has suffered the shipwreck of poverty, do not judge, do not ask for an account of their conduct, but deliver them from their misfortune” (Discourses on the Poor Man Lazarus, II, 5).

It is my hope that the celebration of the World Day of the Poor, now in its fifth year, will grow in our local Churches and inspire a movement of evangelization that meets the poor personally wherever they may be. We cannot wait for the poor to knock on our door; we need urgently to reach them in their homes, in hospitals and nursing homes, on the streets and in the dark corners where they sometimes hide, in shelters and reception centres. It is important to understand how they feel, what they are experiencing and what their hearts desire. Let us make our own the heartfelt plea of Father Primo Mazzolari: “I beg you not to ask me if there are poor people, who they are and how many of them there are, because I fear that those questions represent a distraction or a pretext for avoiding a clear appeal to our consciences and our hearts… I have never counted the poor, because they cannot be counted: the poor are to be embraced, not counted” (“Adesso” n. 7 – 15 April 1949). The poor are present in our midst. How evangelical it would be if we could say with all truth: we too are poor, because only in this way will we truly be able to recognize them, to make them part of our lives and an instrument of our salvation.

(Official translation of the message retrieved from: https://www.vatican.va/content/francesco/en/messages/poveri/documents/20210613-messaggio-v-giornatamondiale-poveri-2021.html)