Home Episkopat (Polski) Card. Semeraro: May the new Blesseds be powerful intercessors for this... 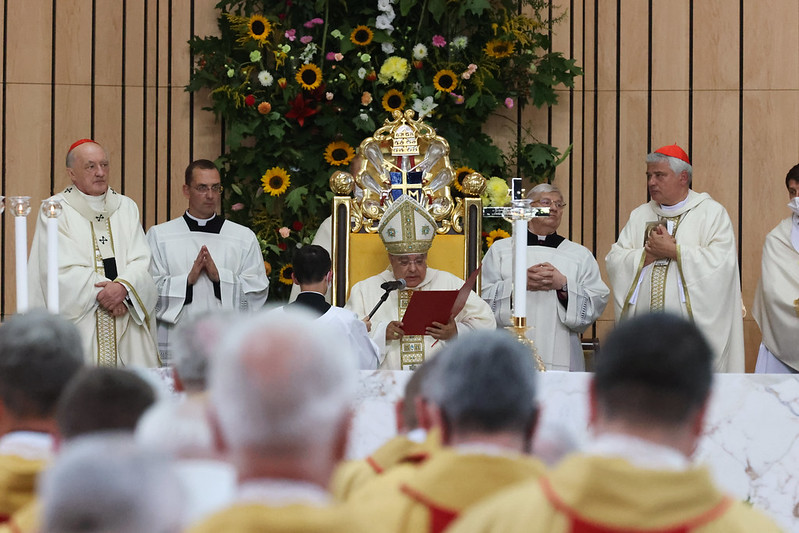 May the new Blesseds be powerful intercessors for this meritorious Nation, may they be a light for state and local authorities, and may support the Church in Poland in constant fidelity to Christ’s Gospel – said Cardinal Marcello Semeraro, prefect of the Congregation for the Causes of Saints, in his homily during the beatification Mass of Card. Stefan Wyszynski and Mother Rose Czacka.

Dear Sisters and Brothers! The words of the song of praise uttered by the Virgin Mary today express our thanksgiving to God for our participation in the beatification of Cardinal Stefan Wyszyński and Mother Elżbieta Róża Czacka here in the Temple of Divine Providence. This temple, erected by the Polish Nation as a votive offering of gratitude for God’s closeness and presence in the glorious and painful history of this country, is today the witness of another confirmation: Poland is a Marian Nation, Poland has offered and donated to the Church, in the course of the different epochs, outstanding figures of saints, men and women of God. Just as He did when He sent Archangel Gabriel to the Virgin, whose name was Mary (cf. Lk 1:27), likewise today God is calling authentic witnesses of holiness to honor and praise His name.

Today, Cardinal Wyszyński and Mother Czacka are beatified together. This is like a complement to the historic meeting, thanks to which these Blesseds met in Laski 95 years ago, in 1926. At that time, the young priest was edified by the faith and perseverance of this woman who, moved by God’s love, was completely devoted to God and her neighbor. This led to precious cooperation, the frank sharing of intentions and plans. Yet, above all, it gave birth to a communion of faith, love for God and the needy and defenseless human being. They both knew how to fill each other with strength, endurance, and courage. He was personally involved in helping all those who experienced abuse and limitations in practicing their freedom and professing their faith; she, blind among the physically and spiritually blind, helped all those who were abandoned and left at the margins of society. On 19 May 1961, Cardinal Wyszyński, presiding over the funeral of Mother Czacka, said of her in his homily: Mother “was a person who constantly stood before the face of her Good Lord; a person who knew that God is Love, above all – Love! A person who steadfastly drew from the fathomless source of God’s love! That is why she was able to share and nourish so many people around her with Love.” Today’s new Blesseds have received from this Nation the inestimable good of faith and the vitality of the centuries-old tradition of love for God. What did they offer the People in return? They offered a life-long conviction of God’s primacy (“Soli Deo”— “To God Alone”—was Cardinal Wyszynski’s episcopal motto), which is capable of restoring man to his dignity. They gave testimony of a life faithful to the Gospel, at all costs. They have left a model of service to a specific person in need, even when no one cares for him, and indifference seems to prevail.

Let us make ours once again the words of Mary, the supreme model of Christian life and the greatest example of holiness. In her humility, she accepted the proclamation that the Eternal Wisdom—which we heard about in the Book of Wisdom of Sirach—would become flesh in her womb. Mary, in the words of St. Paul in his Letter to the Colossians, chosen by God, “holy and beloved” (cf. Col 3:12), was Christ’s mother not only because she conceived him by the Holy Spirit, but also because in her the “will of the heavenly Father” (Mt 12:50) was fully accomplished. Today, we are celebrating her name in a liturgical feast, because the Christian people consider her a shining star, call her their mother and, in danger, run to her as a haven.

One day, Blessed Stefan Wyszyński said about the Virgin Mary: “In a mother’s features we recognize the greatest resemblance with her children. So, if we want to know the Son, we must observe the Mother. The Mother leads to the Son!” The beauty of Christ’s face glows in a holy life. Pope Francis said that the saints are “witnesses whom we venerate and who, in thousands of different ways, bring us to Jesus Christ, the only Lord and Mediator between God and humanity” (Francis, General Audience, 7 April 2021). They are therefore given to us as models to follow, but also as intercessors to whom we can turn with confidence. They are models because they were docile to the grace that worked in them. They are intercessors because, as the Catechism of the Catholic Church reminds us, “They contemplate God, praise him and constantly care for those whom they have left on earth (…). Their intercession is their most exalted service to God’s plan. We can and should ask them to intercede for us and for the whole world” (CCC no. 2683). Let us, therefore, entrust ourselves to the intercession of the new blesseds, that the desire to live like saints may be ignited in us, because, as Pope Francis once again reminds us, “holiness can blossom even in our lives, however weak and marked by sin” (Francis, General Audience, 7 April 2021).

Poland, the Nation of Mary, the land of saints and blesseds, in this Temple of Divine Providence, through the intercession of the Virgin Mary, Blessed Stefan Wyszyński and Blessed Elżbieta Róża Czacka, today let us ask God to grant us the strength to be faithful witnesses of His merciful love towards every needy person of our time. May the new Blesseds be powerful intercessors for this meritorious Nation, may they be a light for state and local authorities, and may support the Church in Poland in constant fidelity to Christ’s Gospel.