Home Episkopat Francis – the Key Terms of the Pontificate 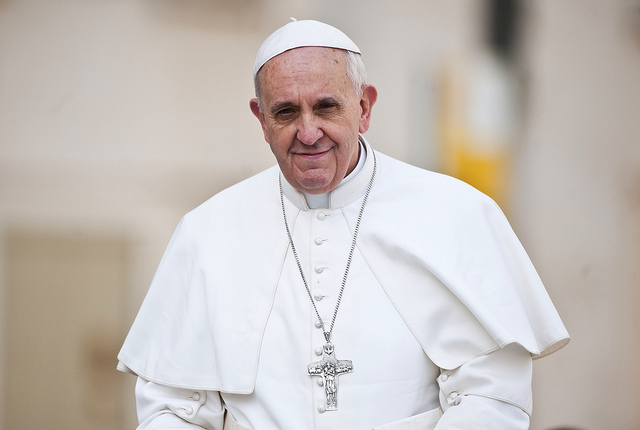 Francis can show the message of the Gospel in an intriguingly new way, responding to the spiritual hunger of the world and offering it hope and meaning.

It needs to be stressed that Francis is not naïve as to the preaching of the Gospel, even if he can be seen as such. This year’s message for the World Day of Migrants he indicated that the migrants should integrate in the European community. In his view, refugees should accept obligations to those who receive them and respect the tangible and spiritual legacy of the host country, be observant of the country’s laws and contribute to its expenses. The pope, then, supports the policy of integration rather than of multiculturalism favoured by leftist circles.

On 16 April 2016, Francis and the Ecumenical Patriarch of Constantinople Bartholomew set out for the Greek island of Lesbos, where in a joint statement they called for addressing the current humanitarian crisis and its root causes. Both called for an end of warfare and violence in the Middle East and for building an equitable and sustainable peace. They encouraged all to take concerted efforts to accept, assist and protect refugees of all religions. The words were followed by a unique gesture: Francis invited a few Muslim families of refugees to depart with him on the papal plane. Later the families were taken care of in Italy by the Community of Sant’Egidio.

As early as during the Holy Mass inaugurating his pontificate, Pope Francis spoke about the need to be protectors of the creation. He confessed that St. Francis of Assisi, whose name and message is the inspiration for his own pontificate, is a paragon of austere life, respectful of the creation, so much distant from the present-day “culture of exclusion”.

He developed these considerations in the encyclical Laudato Si’: “The present ecological crisis is one small sign of the ethical, cultural and spiritual crisis of modernity”. Forgetting about the Creator and disregarding Him in decision-making processes leads to a degeneration of the environment and to the degradation of man and ultimately poses a threat to the entire human race. It moreover breeds huge social inequalities and affects the poorest of the poor the most. Francis moreover censures abortion as completely alien to nature and God’s plan and the gender ideology, another present-day pathology arising from a disrespect for nature’s laws.

In conclusion he calls for building an “integral ecology”, which will result in a new model of social and economic justice.

Some of the statements of Pope Francis about Europe seem to show a profound disillusion. On the one hand he indicates that the continent is the cradle of exquisite culture which respects the dignity of the human person, but on the other hand is aware of the deep crisis of the Old Continent. He therefore called Europe “an ageing grandmother”.

He expressed this e.g. during his visit to the European Parliament and to the Council of Europe on 25 November 2014. According to Francis, it is paradoxical that Europe, despite being the cradle of the inestimable values of contemporary human civilisation, at present seems fatigued and barren. He spoke about a Europe which is “no longer fertile and vibrant”, and where “the noble ideals have lost their attractiveness”.

In turn, when conferred the Charlemagne Prize by the European Union leaders in the Vatican on 6 May 2016, the Pontiff asked the following question: “What has happened to you, Europe, the home of poets, philosophers, artists, musicians, and men and women of letters, (…) the mother of peoples and nations, the mother of great men and women who upheld, and even sacrificed their lives for, the dignity of their brothers and sisters?”.

The Pontiff’s reflection about Europe is not limited to a mere observation of the current crisis. Francis calls for revisiting what are the most valuable elements of European cultural heritage. He still believes that today’s Europe is “capable of giving birth to a new humanism”, which should rest on three pillars: the capacity to integrate, the capacity for dialogue and the capacity to generate.

The pope observed: “I dream of a Europe that is respects every child, (…) of a Europe that cares for children, that offers fraternal help to the poor and those newcomers seeking acceptance because they have lost everything and need shelter. (…) I dream of a Europe where being a migrant is not a crime but a summons to greater commitment on behalf of the dignity of every human being”.

To his mind, Europe will not rediscover the “ability to give birth” if it remains a “soulless bureaucratic structure”. I dream of a young Europe that is still capable of being a mother: a mother who has life because she respects life. (…) I dream of a Europe of families, whose very efficient politicians (…) are focused more on children’s births than on multiplying gains”.

The family as the focus of attention

For the first time ever, two successive sessions of the Synod of Bishops were dedicated to the same topic. This shows that marriage and the family are invariably the focus of Pope Francis’ interest. He stresses that the family needs to be accompanied in its joys, concerns, sadness, and sometimes drama, and that this should be an absolute priority of the Church.

Francis knows well about the unprecedented family crisis. He indicates the following reasons: “relativism, the culture of the ephemeral, not being open to life”. In the Philippines he pointed out attempts to ideologically colonise the family and stressed the need to be alert to those to try to destroy it. Still, as he assures, it is in the family, sacred and based on the union of love, that we can find the strength to overcome the above risks. The same family problems are tackled in the Amoris Laetitia exhortation, which sums up the sessions of two synods.

The pope clearly and uncompromisingly stresses that the family rests on the cornerstone of a marriage of woman and man, which is by nature complementary. This is a shared path where the husband is supposed to “help his wife become more of a woman, and the task of the woman is to help her husband to become more of a man”. Stability and fertility must be the fundamental features of the family, where an individual learns a faithful love till death.

It is in the family that an individual becomes part of a larger community. Therefore, according to Francis, states and institutions are obliged to care about the family as the most precious treasure, since it develops social behaviour patterns and impact the “quality” of citizens. The state can only benefit when having regard for the family and thrives demographically and economically.

Large families have a unique role to play. “In a world often marked by selfishness, a large family is a school of solidarity and sharing; and this attitude is to the benefit of society as a whole”, said the pope to the National Numerous Families Association.

The pope stresses in the exhortation that families have a special task to perform in today’s world and in the Church. He indicates that “A well-lived family communion is a true way to sanctity in everyday life and a path for a mystical development, a means for an inner union with God” (n. 316). The Pontiff therefore urges priests and bishops to focus on the family in their ministry, making families the subjects rather than only objects of pastoral care.

The pope admits that the task of the Church today is to accompany families, especially those experiencing dramas. He does not forget those who live in non-sacramental marriages, increasing in numbers. He does not condemn, however, those who live in civil unions, but urges others to dialogue with them, which will ultimately “lead them to the full reality of marriage and family” (no. 294). He calls on the need to apply the principle of gradual development, when each person develops through a gradual inclusion of God’s gifts and Love’s demands in one’s personal and social life (no. 295).

When speaking of divorcees and civilly remarried persons, the pope warns against hasty judgments, which “do not take into account the complexity of their particular situation and the suffering of those persons because of their position”. He is convinced that “they need to be more fully integrated into Christian communities in the variety of ways possible. Their participation can be expressed in different ecclesial services in the social works and prayer meetings. Such persons need to feel not as excommunicated members of the Church, but instead as living members, able to live and grow in the Church and experience her as a mother who welcomes them always, who takes care of them with affection and encourages them along the path of life and the Gospel” (no. 299).

Recalling that each situation is different, he attaches much attention to individual discernment in a dialogue led “in an inner forum” by priests with the interested individuals. He demands a more intense inclusion of the criterion of human conscience in the practice of the Church. He moreover indicates certain mitigating circumstances, which should be taken into consideration in the pastoral discernment. He calls for applying the logic of pastoral mercy.

Since his election on 13 March 2013, Francis has had exemplary contacts with the Jews. Cardinal Jorge Mario Bergoglio’s election to papacy was welcomed by all the communities of the Italian Jews. “After two Ashkenazim we finally have a Sephardi”, quipped Rabbi Di Segni of Rome on his Twitter account.

Francis’ excellent relations with the Jews have a certain personal colour to them, namely his longstanding friendship with Rabbi Abraham Skorka, Rector of the Latin America Rabbinical Seminary, whose grandparents had left Poland in the 1920s.

In October 2013, meeting the Jewish community of Rome to commemorate the 70th anniversary of the deportation of the Jews from the Eternal City, Francis urged: “It is a contradiction in itself that a Christian should be an anti-Semite. Let anti-Semitism be removed from the heart and life of every man and every woman!”.

When in Israel in May 2014, Francis visited the Yad Vashem World Holocaust Remembrance Centre in Jerusalem. Paying an homage to the Holocaust victims, the pope prayed: “Grant us the grace to be ashamed of what we men have done, to be ashamed of this massive idolatry, of having despised and destroyed our own flesh which you formed from the earth, to which you gave life with your own breath of life. Never again, Lord, never again!”