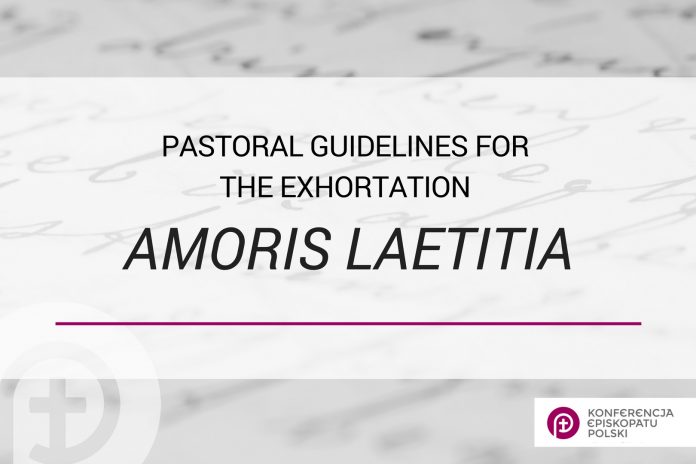 The Polish Bishops’ Conference on 379th Plenary Meeting, on June 8, adopted the „Pastoral Guidelines for the Exhortation Amoris Laetitia”. Bishops emphasize the need to serve the engaged, spouses and families as well as people living in irregular relationships according to the pastoral criteria proposed by Pope Francis: acceptance, accompaniment, discernment and integration. The document does not address the issue of holy communion for people living in non-sacramental relationships.
“We receive, therefore, with due attention and effort, Pope Francis’ Post-Synodal Apostolic Exhortation Amoris Laetitia, which is an expression of his concern for the good health of marital love in the family” – write Polish Bishops.
The document consists of four parts. The first one shows the basic accents of Pope Francis’ teaching in the context of previous popes. “The previous programmatic documents include Paul VI’s Humanae vitae, John Paul II’s Familiaris Consortio, Reconciliatio et Poenitentia, Veritatis Splendor and Benedict XVI’s Deus Caritas Est and Sacramentum Caritatis” – we read in the document.
In the second chapter entitled “The joy of love in the marriage and family”, Bishops resemble, among others, rich experience of the Church in Poland in the pastoral care of the engaged, spouses and families. They also explain the pastoral criteria of Pope Francis, such as reception, accompaniment, discernment and integration.
The third chapter of the document indicates new impulses in the pastoral ministry of the engaged, spouses and people who found themselves in difficult and irregular situations. “In the pastoral care of the engaged, young people must be helped to discover the value and richness of marriage. It is necessary to recall the importance of virtue, especially of purity, which is the condition for the authentic development of spousal love” – we read in the document.
Bishops remind that “a loving look and support should be shown to people whose spouses have abandoned or left them, but who are now making efforts to return to the sacramental spouse, through continuous love, loyalty, and prayer”. They explain that “understanding should also be shown to the faithful who, after the disintegration of their sacramental marriage, have entered into new unions—only civilly because the previous marital bond remains an obstacle—but try to live in a Christian way, raising their children in faith, and, wanting to fully participate in the sacrament of the Eucharist, have decided to live as brother and sister”.
The fourth chapter is entitled “A Call for Pastoral Discernment and the Logic of Integration in the Light of Chapter VIII of Amoris laetitia”. The Bishops indicate that Pope Francis draws attention to the “countless diversity of situations”, in which there are people who have divorced and have entered into a new civil union. For the sake of their spiritual well-being, a clear understanding of their situation is necessary, taking into account the fact that the degree of responsibility is not the same in all cases. “Pope Francis speaks—and this is one of the central aspects of Amoris Laetitia—about the need to refer the general norm to real people and their specific situations. In this way, he develops the thought of John Paul II, who pointed to the need to take into account the complexity of the situation of divorced faithful living in new civil unions (cf. FC 84 §2)” – we read in the document.
Polish Bishops stress that discernment of specific situations “should first try to establish whether the first marriage can be annulled through an ecclesiastical trial”. However, “in a situation where it is decided by a final judgment that annulment cannot be established, it is necessary to continue the pastoral analysis”. Bishops add that “the discernment can lead to different, ever deeper forms of integration with the ecclesial community. It should be individualized, consistent, and long-term spiritual guidance”.
At the end, Bishops write that it is necessary to elaborate a new Directory for the Pastoral Care of Families for the Church in Poland. “On that basis, it will be possible to prepare diocesan or metropolitan instructions and to create centers to serve married couples and families. At the same time, it is necessary to develop a program and define how priest will be prepared to assume the of accompanying the faithful and discerning their specific situations. We must characterize the pastoral ministry with closeness, a respectful and compassionate look that simultaneously heals, liberates, and encourages growth in Christian life” – Bishops point out.
Press Office of the Polish Bishops‘ Conference