Home Episkopat PRESS RELEASE Conference on the Protection of Minors in the Churches of... 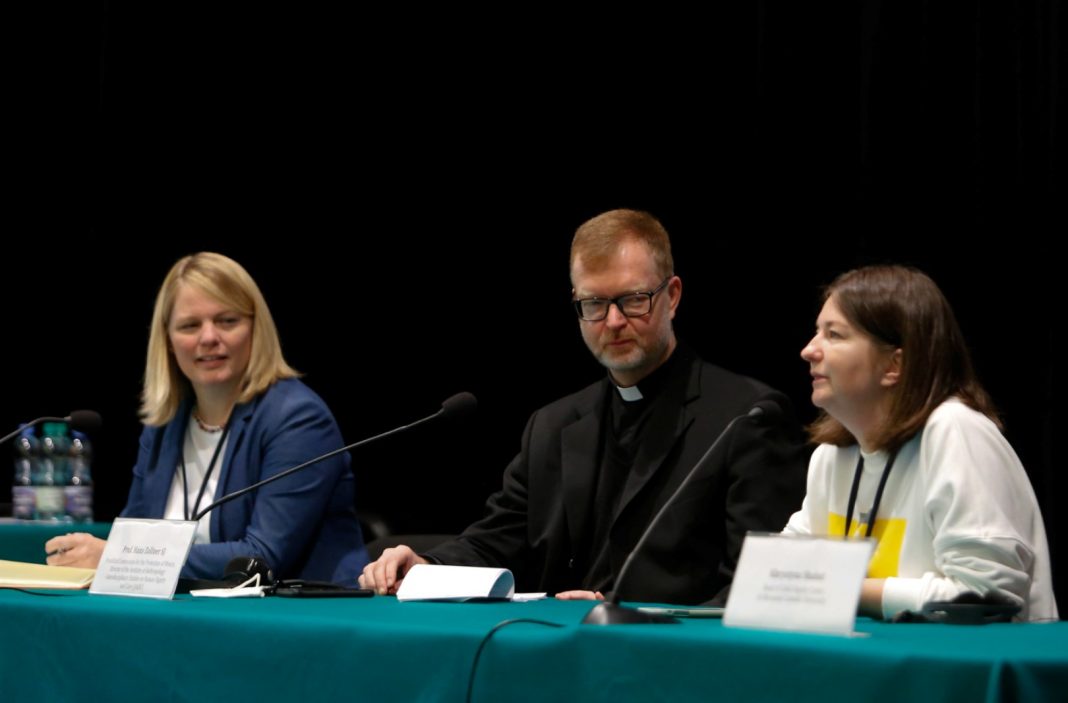 The effective protection of minors requires the cooperation of all who form the Church – emphasized during the international conference “Our Common Mission of Safeguarding God’s Children,” which concluded today in Warsaw. During the four-day meeting, Church delegates from 20 Central and Eastern European countries listened to lectures and discussed in groups the spiritual, theological, legal, and pastoral aspects of the crisis of sexual abuse of minors by priests.

In his message to the conference participants, Pope Francis encouraged them to listen to the cries of the wounded. He called for “the good of the victims not to be relegated to the background of an ill-conceived concern for the image of the Church as an institution.”

Opening the session, Professor Hanna Suchocka of the Pontifical Commission for the Protection of Minors admitted that initially it seemed that the problem of sexual abuse had bypassed Central and Eastern Europe. However, it turned out that this is not true, therefore, “we decided that a conference of representatives of this region would be advisable,” said the former prime minister. She added that Poland was chosen as the venue for the conference, as it was here that the largest number of cases were uncovered, and the largest number of trials were underway.

Welcoming the conference participants, Archbishop Stanisław Gądecki, the President of the Polish Catholic Bishops Conference, indicated that they gather here “to cure themselves of indifference, and even more so, of disregard for the injustice” of the victims. In turn, Cardinal Seán O’Malley, President of the Pontifical Commission for the Protection of Minors, stressed “the need for a pastoral conversion,” which begins with recognizing the truth of what happened and listening to the victims. He indicated that caring for these people should be a pastoral priority of the Church.

During Vespers, combined with prayer for the wounded, conference participants listened to the testimonies of two people victimized by sexual abuse. Fr. Tarsycjusz Krasucki pointed out, among other things, the excessive length of Church trials on sexual abuse committed by clergy, the lack of information about its course, and the need to grant victims the status of parties, not just witnesses in canonical proceedings.

The second day of the conference addressed, among other things, the responsibility of pastors and the need for deep conversion in the face of sins and crimes of sexual abuse of minors by clergy.

During the morning Eucharist, the president of the Pontifical Commission for the Protection of Minors, Cardinal Seán O’Malley, OFMCap., deplored the crimes committed by priests. Referring to the memorial of Saints Andrew Kim Tae-gon and Companions, he said: “it is difficult to suffer for the Church, but suffering inflicted by the Church and its clergy can be even more difficult.”He noted that the reason for the Warsaw meeting is that “many of our brothers and sisters have suffered at the hands of clergy who committed evil acts by exploiting minors.”

In a presentation entitled “With a Repentant Heart,” Fr. Tomáš Halík, a priest from Prague, the. Czech Republic, noted that the pandemic of sexual, psychological, and spiritual abuse and abuse of power and authority by members of the clergy, which is gradually being revealed, long hidden and trivialized, is one aspect of the deep crisis of the Church in the world today. In post-communist countries it has a number of specific causes, including clericalism, triumphalism, and abuse of power and authority. This crisis can only be overcome with the courage to reform many of the problems, said the well-known Czech pastor, psychologist, and theologian.

Prof. Dr. Myriam Wijlens, professor of canon law in Erfurt and a member of the Pontifical Commission for the Protection of Minors, analyzing the canonical legislation, pointed out the need for a responsible approach of bishops to cases of these crimes. She pointed out that looking at the past, one can see many mistakes of pastors who focused more on the reputation of the Church than on the protection of minors.

The theological consequences of sexual abuse of minors by clergy was the main topic of the third day of the conference. Experiences were also shared on the practice of the protection of minors in different Central and Eastern European countries.

Dr. Grzegorz Strzelczyk drew attention to the consequences of undermining trust in a clergyman who has sexually abused a minor and the inadequate reaction of Church authorities. He stressed that the very survival of religious communities depends, in a sense, on the proper response of Church structures to the sexual abuse of minors. He pointed out that the Church’s response to the tragedy of the sexual abuse of minors by priests usually focuses on legal, psychological, and spiritual aspects. Theological reflection remains somewhat in the shadows, but seems necessary to understand it fully.

He stressed that the Church, which proclaims the reconciliation given to men in Christ, can only be credible if, in the face of great evil, it is capable of doing penance, which is meant to lead to an authentic and profound transformation of people.

During the meeting, the participants also became acquainted with examples of the Church’s work in Central and Eastern Europe in the field of preventing the abuse of minors and helping the victims of these crimes. Examples of concrete actions carried out in Croatia, Hungary, the Czech Republic, Slovakia, and Poland were presented.

O. Adam Żak and Ewa Kusz, co-founders of the Child Protection Center, announced their intention to include the main themes of the conference in the Synod of Bishops, which begins in November in Rome.

Summing up the four-day session, Archbishop Wojciech Polak said that it is becoming increasingly clear that the crisis caused by the sexual abuse of minors and the negligence of church leaders touches the essence of the Church community. Archbishop Polak pointed out that in view of the fact that the crime of sexual abuse devastates human life in all its dimensions, it is necessary to combine various competencies. Therefore, in the whole process of recovering from the crisis, it is necessary to involve lawyers, psychologists, therapists, psychiatrists, sexologists and also sociologists.

The Primate expressed hope that the Warsaw conference will strengthen mutual solidarity and initiate the process of our common reflection, exchange of experiences and solutions.

The conference, which lasted from September 19 to 22, was attended by members of the Pontifical Commission for the Protection of Minors, bishops, major superiors of male and female religious orders, as well as lay people working to protect children and young people in 20 countries of Central and Eastern Europe. They represent the Roman Catholic and the Greek Catholic Church from Poland, Albania, Croatia, Slovenia, Hungary, Romania, Moldova, Bulgaria, the Czech Republic, Slovakia, Ukraine, Russia, Estonia, Latvia, Lithuania, Belarus, Serbia, Montenegro, North Macedonia, and Kosovo.

The conference is organized by the Pontifical Commission for the Protection of Minors and the Polish Catholic Bishops Conference.