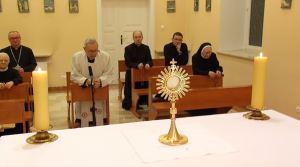 TV, radio and online broadcasts of the Holy Mass, prayer of the Rosary at 8.30 p.m. for an end of the pandemic and Internet retreats – these are some of the initiatives taken by the Church in Poland due to the ongoing epidemic emergency in Poland and the reduction of the number of people in churches. All dioceses have been involved in the on-line initiatives – says Fr. Paweł Rytel-Andrianik, the spokesman of the Polish Bishops’ Conference.

In the Order of the Permanent Council of the Polish Episcopate issued on March 12, the bishops encouraged people – who during a pandemic take advantage of the dispensation and do not participate in the Masses – to spiritual unity with the community of the Church through radio, television or Internet broadcasts. “Thanks to the broadcasts, the faithful from all over Poland, as well as Poles abroad, can unite spiritually in both Sunday and daily prayer” – emphasizes Fr. Rytel-Andrianik.

The broadcasts include Holy Masses from i.a. the Shrine of the Divine Mercy in Łagiewniki, daily Eucharist from the Chapel of Our Lady of Jasna Góra. At 8 p.m. there is a Holy Mass celebrated for the sick, physicians, medical staff and sanitary services and for an end of the coronavirus epidemic.

As encouraged by the President of the Polish Episcopate, Archbishop Stanisław Gądecki, every day at 8.30 p.m. there is a prayer of the rosary for an end of the pandemic. At this time, clergy and consecrated persons pray in churches, in spiritual communion with the lay faithful, who continue to pray at home. In order to facilitate this, broadcasts of this prayer are also available on the Internet.

In connection with the ongoing Lent and the cancellation of parish retreats, there are proposals for Internet retreats in the social media, and above all on the Internet.  These are preached, among others, by Polish bishops.

“This year’s Lent is special. It is a fast from large gatherings on prayer, but not from prayer. People have spiritual needs and the media meet them through broadcasts and online prayer proposals. However, prayer in the virtual world should lead us to pray in sacramental reality as soon as the pandemic stops, for which we pray” – says the spokesman of the Polish Bishops’ Conference.