On Saturday (July 30), Pope Francis will meet with pilgrims in Brzegi to keep vigil and pray together. The Holy Father will not only deliver a speech to the young, but he will hear their testimonies as well. The first event to take place at the Misericordiae Campus in Brzegi is the Vigil of the young with Francis. Then, on Sunday (July 31), the pope will celebrate the Final Mass concluding the World Youth Day.

„We expect up to 1 million pilgrims at tomorrow’s vigil with the pope at the Misericordiae Campus and anywhere from 1.5 million to 1.8 million participants at the closing Mass on Sunday,” Dorota Abdelmoula, press spokeswoman for the WYD organisers, told PAP on July 29.

She added that turnout „depends on the weather and on how many pilgrims from Poland will attend.”

She denied speculation that the Saturday and Sunday festivities with the pope’s participation could be moved to Blonia Park because of heavy rainfall at night.

On Saturday (July 30), the Holy Father, accompanied by representatives of all continents – six young persons, will travel to “Zone 0”, near which – not far from the altar – the gate of mercy will be situated. Going through the Gate will be a reference to the ongoing Mercy Jubilee.

The meaning of the prayer will be stressed in the second part – it will be a dialogue of the pope with the young who regained hope under the influence of God’s grace. Before delivering his speech, the Holy Father will by tradition listen to testimonies of young people – this time, they will be: a young woman from Poland, a young woman from Syria and a young man from Paraguay.

The main idea of the first image is to show that in the midst of the banalities of the contemporary, carefree life, there exists a possibility of finding a spiritual way. The stage will represent a typical contemporary disco with techno music, thus forming a background for groups of young people, members of various cultures. At one moment, the music will stop and a girl named Faustina will appear. At that point, the first testimony of faith will be delivered by Natalia Wrzesien from Poland.

In the second scene, a film projected on a giant screen will show the terrorist attacks of September 11, 2001 in New York, the last year’s attack in Paris, as well as war scenes from Iraq and Syria. When the film finishes, six people (symbolizing six continents) will rush in turn onto the stage and shout the word “No” in different languages, e.g. German, English, Spanish or Chinese. After the end of this scene, the second testimony will be delivered by Rand Mittri from Syria.

The key issue of the third scene will be the problem of the contemporary civilisation enclosed within a cyberspace. The fourth scene will refer to forgiveness, and the faithful will watch the Pope Jonhn Paul II talking to Ali Agca.

The fifth scene will have the motto “Joy to the Sad”. Faustina, accompanied by a group of wanderers, will reach a district of large blocks of flats, where youth underclass meets. The finale of the scene will show the persons whom the faithful watched at the beginning, but this time they will be smiling. After this, Miguel from Asuncion in Paraguay will deliver the third testimony.

The third part is the adoration of the Most Blessed Sacrament. The young will be reciting the Chaplet of the Divine Mercy, there will also be time for a moment of meditation, and at the end, the pope will bless them with the Most Blessed Sacrament. It has also been planned that Jasna Gora Appeal will be sung in Latin, as a reference to John Paul’s prayer in 1991 at Jasna Gora.

During the adoration, the altar designed by Mariusz Drapikowski will be used. The altar will be later sent to Kibeho (Rwanda) within the frames of the project called “12 Stars in the Crown of Our Lady Queen of Peace”, meaning 12 localisations in the world where perpetual adoration for world peace is to take place.

Directly after the end of the Vigil with the Holy Father, an ecumenical concert CREDO in Misericordiam Dei will start. Divided into 12 parts, the concert will be worshipping Divine Mercy. Each part will be preceded with prayer conducted by young people from all over the world. The adoration concert will be an ecumenical event. Christians representing various communities will meet on the stage.

The events preceding the Saturday Vigil will include concerts of Il Volo (Italy), Rexband (India) and young people from the Maronite community Jesus ma Joie (Lebanon). There will be also presentations of projects carried out by the Frassati Foundation from Italy, the Salesian Missionary Voluntary Service and the papal association Aid to the Church in Need. (PAP/KAI) 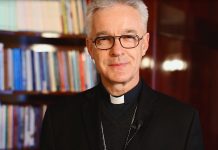 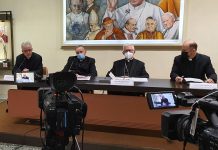 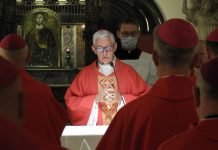