The first National Day of Reading the Holy Scriptures, the first document of the Episcopate devoted entirely to patriotism, the first Day of the Poor – listed the President of the Polish Bishops’ Conference, Archbishop Stanislaw Gadecki, speaking about new initiatives that appeared in the Church in 2017.

The President of the Polish Episcopate assessed positively the passing year. “I think this year was good when it comes to the life of the Church, because there have appeared many valuable initiatives that give hope for the future”, said Archbishop Stanislaw Gadecki. Among the important events he mentioned the First National Day of Reading the Holy Scriptures, celebrated on April 30. He also drew attention to the document entitled “The Christian Shape of Patriotism”, published by the Polish Bishops’ Conference, which he evaluated as useful, among others due to the fact that it points out the fact that “love for one’s homeland can never be an excuse for disrespect, aggression and violence”.

He also drew attention to the citizen’s legislative initiative “Stop abortion”. “In the last call of the Presidency of the Episcopate, we gave full support to this initiative”, he stressed and added that the Church is convinced from the very beginning that protecting life from conception to natural death is its first of human rights and the duty of the Church. He also mentioned the decision of the Polish parliament to ban Sunday trading, which will apply from 2020. He called it “a step in the right direction, bringing us closer to Europe”.

Speaking about what has happened in the Church over the last year in the field of teaching, he referred to the murder of missionary volunteer Helena Kmiec in Bolivia. “This is the strongest testimony, which confirms the Church’s teaching through a life that is fully committed and consistent with faith”, concluded Archbishop Gadecki. 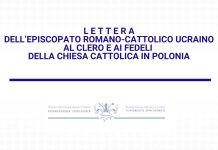